Colas Rail is a major French rail company offering turnkey solutions in rail construction. It was established in January 2008 as a result of a merger between Seco Rail and Spie Rail, two of the world’s major players in the railway sector. The new entity combined their skills and resources and now employs around 4,200 people with their international operation, offering world-scale and high-end railway expertise. 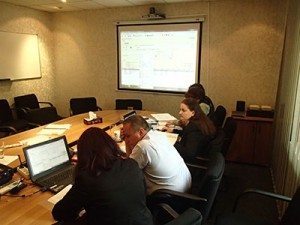 Silviu Tronaru, one of the attendees says: “This training helped us to understand all the features and benefits of Benchmark Estimating Software. We are very excited to start using the software, so we can generate faster and more consistent estimates for our railway infrastructure projects. ”

The Benchmark Estimating Software team are now working with Colas Rail to set up their database, which will be followed by further training and implementation over the next few months.

Bucharest is a beautiful city with many historic sites (Palace of Parliament, the largest parliament building in the world)

The Colas Rail contract marks a significant expansion for Benchmark Estimating Software into the European market and highlights how our software can be used for rail infrastructure services through to major rail construction and maintenance projects.

Colas is a member of the Bouygues group of companies.

If you have any questions about how you can benefit from our software, please feel free to contact us.
Return to our comprehensive list of Case Studies.

Read more about Colas Rail on their web site.