At Benchmark Estimating, we are committed to the continual enhancement of our estimating software solutions and we make it one of our top priorities to keep abreast of the latest technologies entering the marketplace.

One of the biggest players in the software development field, Microsoft, recently held a Windows 8 Developer Camp at the University of New South Wales in Sydney aimed at teaching developers how to create Windows 8 applications. Two of Benchmark Estimating’s development team members, Daniel and Jamie, were there and took part in some valuable information sessions that will help them with the future development of our estimating software. 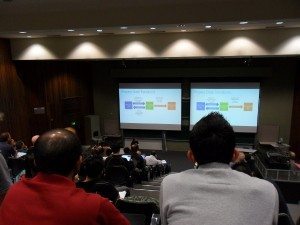 The interactive sessions that ran throughout the day looked at a variety of topics including:

Jamie said “the day was very informative and we are looking forward to applying what we have learnt to the ongoing development of Benchmark Estimating Software”.

The Windows 8 Consumer Preview was released to the public in February 2012 and it was downloaded 1 million times in the first day alone. Recent media reports suggest that the launch of Windows 8 will be in late October of this year.